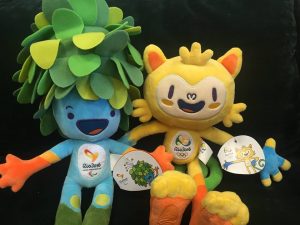 The Consulate General of Brazil in Toronto would like to invite children aged 5 to 17 years old, to create an artwork with the theme “Olympic and Paralympic Games – Rio 2016” and send it to the Consulate to get a chance to win prizes!

a) Send to the Consulate General of Brazil in Toronto until September 7, 2016, an original drawing that combines elements of Brazil and the Olympic or Paralympic Games – Rio 2016.

b) Each contestant may submit only one drawing that shall indicate on the back: name and age of the artist, address and telephone number. The artwork can be created using various materials (watercolors, gouaches, magic markers and other materials), using all the techniques (collages, textiles and various materials, etc.) and should be presented in a single A3 size drawing paper.

c) The drawing must be sent to the Consulate General of Brazil in Toronto, 77 Bloor Street West, Suite 1109, Toronto, ON – M5S 1M2. Please indicate on the envelope “Drawing Contest – Olympic and Paralympic Games – Rio 2016”.

d) A panel of judges will select the three (3) best drawings in each age category, to be posted on the Consulate’s Facebook page for public voting from September 8 to 18, 2016. Participants whose work receives the highest number of ‘likes’ will win:

e) Children aged 5 to 17 years old, of all nationalities, who are permanent or temporary residents in Canada, at this consular jurisdiction – Provinces of Ontario (except Ottawa), Manitoba and Nunavut – will be able to participate

f) Deadline for submission is September 7.

g) September 8 the drawings will be posted on the Consulate`s Facebook page for public voting until September 18.

i) After the contest, all the drawings will be displayed at the Consulate General of Brazil in Toronto, 77 Bloor Street West, Suite 1109, Toronto, ON – M5S 1M2, for 60 days.

j) By submitting the drawing, the candidate will automatically agree with the contest rules, granting the Consulate General of Brazil in Toronto the non-exclusive right to reproduce and publish it.

k) A Prize Giving Ceremony will be held at the Consulate and will be scheduled according to the winners’ availability.

More information at the page of the Consulate on Facebook.