A sweet voice shining in Canada. 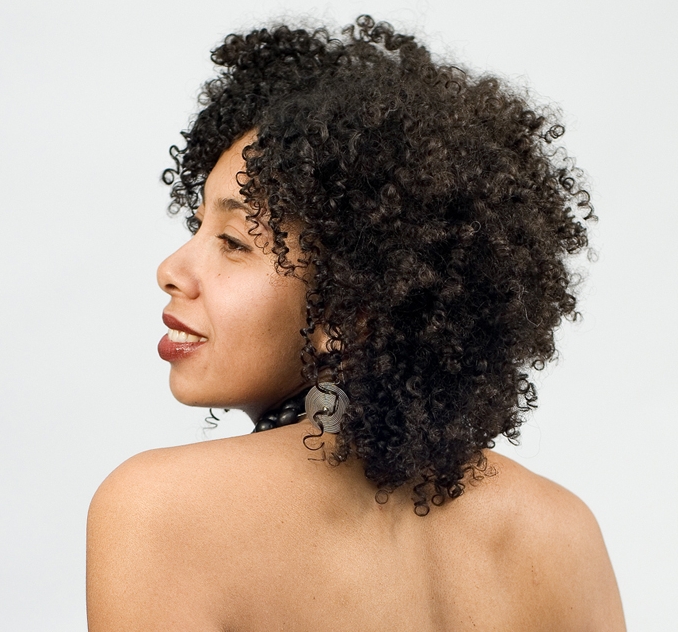 The vocalist and guitar player Luanda Jones, who has a suave voice and mixes Bossa Nova, jazz, samba, funk and who has been enchanting and winning over Canadians for around six years, will be one of the attractions at the Toronto Jazz Festival in June. With a great biography in the musical world, the Carioca Luanda is the daughter of the rock drummer, Luís Moreno, who played with great names such as Elis Regina and Raul Seixas, and Irinéa Ribeiro, who worked with Tim Maia, Cauby Peixoto, and many well known names in MPB.

Luanda just arrived from a five month tour in Europe and, back in Toronto she will play at the TD Jazz Festival, on two days, the 24th and 25th of June.

Always active in the Canadian music circuit, for two consecutive years she participated in the cultural and musical festival, Luminato in Toronto. Recently she released her first CD “Aquarela”, with the participation of musicians from Toronto. Aquarela also includes her own compositions and some of her mother’s, Irinéa Maria Ribeiro.

Wave spoke to this artist with the sweet and captivating voice, who has gained respect and affection from music aficionados, the world over.

You were born to a family of musicians and began your career as a child, when you were only 9 years old. When did you discover that you also wanted to be an artist?
Luanda: I was lucky to grow up surrounded by great singers, musicians and composers. I remember the music parties my parents always had at home that would go to the early morning. I was always enticed by this group to sing along, opening up the vocal chords, all very elaborate. I was very enchanted by this, and I simply loved being there.

As a result of all this early involvement with music, I was already working at the age of 9 singing in youth choirs and jingles. But the biggest incentive was when I was invited to sing at one of my mom’s shows. Her songs at the time were not simple, complex melodies and dense lyrics. But beautiful. Very beautiful.

When I got up on stage for the first time, my legs shook, my heart was pounding. I wanted to disappear…all those eyes looking at me. I was afraid! At that exact moment, my mother looked at me and said sweetly: sing my child! From then on, all I ever wanted in life was to be on a stage.

You have always lived with different genres of music, from vibrant rock to classical music, what is Luanda Jones’ style?
Luanda: I always listened to different genres. I grew up listening to jazz, bossa, progressive rock, soul music and the melodies of popular Brazilian music. I was always demanding with the quality of music, which to me meant to honour my roots.

When I came to Canada, my heart opened up to chorinho, samba, maracatu, folkloric, and African rhythms. All this mixed with my essence, making me open up to new sound experiences – multicultural ones.

What made you come to Toronto?
Luanda: I met Kevin, who became my husband and the reason why I immigrated here.

Tell us a little bit about the beginning of your international career in Canada.
Luanda: I came here without knowing a lot of people, but in my second month I received a lot of invitations.

I opened for various shows with local Canadian artists, such as LaL, Lady Son, Maracatu Nunca Antes, Dominic Mancuso, Samba Squad. Then I got an invitation to sing weekly at a show house in town, which gave me the opportunity to meet many musicians in the Toronto music scene. From then on, I always played in places such as the Lula Lounge and at the Distillery District.

In 2007, I received a grant from the Canada Council for the Arts (CCA) to compose. I composed and selected10 songs that would be on my CD. It was the first time that I had applied and I was very happy to receive this aid from the Canadian government, which encourages the arts, even if they are in other languages.

In 2009 I applied for another grant from the government of Ontario, the Ontario Arts Council (OAC), which gave me the funds to finally record my first CD. My CD Aquarela was released in 2010 and was very well received by critics and the Canadian press, and was played on the radios CBC 1 and 2 and Jazz FM.

You have participated in many shows and festivals, such as Luminato in Toronto, and soon you will be a part of the acclaimed Toronto Jazz Festival singing Brazilian Jazz with the Canadian pianist Gordon Sheard. How did this fantastic opportunity come about?
Luanda: With Gordon, everything happened from a show invitation. I always admired him as a pianist and a profound connoisseur of Brazilian music. At this show, which took place at a jazz festival in a city in Ontario, Gordon called on great jazz musicians in Canada. The group was made up of George Koller on acoustic bass, Gordon Sheard on the piano and arrangements, Mark Kelso on drums and Maninho Costa on percussion.

From there the quintet Sinal Aberto was formed, which is a Brazilian jazz band with its own repertoire (Gordon’s and my music) and with various MPB classics, including Pixinguinha, Tom Jobim, Chico Buarque, Cartola and Milton Nascimento among others.

With this marvellous band, we played in many Jazz festivals in Ontario and we are planning to record a CD. We are in the composition and planning stage.

Your songs have different musical styles, such as samba, jazz and Bossa Nova. What is it like to compose such eclectic music?
Luanda: This is what I would call “musical absorption”, a consequence of my jazz and bossa roots with the new influences that showed up here, in Canada.

This is reflected in my first CD, Aquarela. In it I tell various stories, from the first song to the last. On the track “música”, I describe the relationship of music in my life. On the track “Menino”, I tell, in a bossa rhythm, how I got here. The track “Se Segura’, describes the mix of funk-soul with samba.

How do you see Brazilian music from a Canadian point of view?
Luanda: I think it is an ample and new market. Our culture is very well recognised and valued. Whenever I perform, I say that I am from Rio and that I will only be singing popular Brazilian music. I can see the respect in the audience through their silence and applause, which is made up mainly of Canadians.

Sometimes I hear things like: “I didn’t understand a word of what you were saying, but I understood the happiness through the melody. And this makes me happy too.”

I think it is fantastic to be able to promote our music and our culture around the world. And I am not just referring to the arts. I am also talking about our joy, optimism and perseverance. These are things that are a part of us. The intensity with which people reflect this, is wonderful.

How was your tour in Europe?
Luanda: It was gratifying, above all. I played, sang, took pictures and composed. I was inspired. I made a lot of contacts, met great musicians, some Brazilian. I performed in London, Paris and Portugal. I participated in many Jam sessions in jazz bars, where Brazilian music is always welcome. My plan is to keep these contacts and grow more in that market.

What are your plans for the future? Any chance of going back to Brazil?
Luanda: Record a new CD. I already have many new songs that were composed during my trip to Europe.

I Love Brazil very much. Most of all, my city Rio. But I believe that it is not time for me to return yet, seeing as other doors are opening up. As an Aquarian, I like to discover something new, travel, make new friends along the road. There will be time to return, and I will know it when the time comes.

Any message to share with the Brazilians who live in Canada ?
Luanda: Believe in the pleasure of doing things with love; that anything can happen. Independent of the work we do here, believe that imperative good will and kindness always generates good results.

Being away from home is not always easy. Leaving family and friends – a whole life story. But I believe we have a plan to fulfill, and this is what makes me continue, always! I thank the Brazilian community for the affection and strength that they have always given me. It certainly warms me up in this cold Canadian land.

Interview with Ronnie Von and his son Leo Von