A diamond in the rough who has been shaped with time, but whose gift of singing was always present in her soul. High spirited, vigorous with a voice compared to Alcione and Ivete Sangalo. This is Cibelle Iglesias, a ‘mineirinha’ who loves what she does. She lives in Toronto and has won over the hearts of Brazilians and Canadians alike.

When she was a young girl, she lost contact with her father, a bass player, who in the 70’s sang and played his instrument in the Minas Gerais nightlife. But Iglesias never lost the musical presence in her life; she loved listening to and singing songs at home. Her mother, her greatest influence, taught her to like various types of music, from bolero to bossa nova. Read below the interview given to Wave:

When did you begin to sing?
Iglesias – I worked at a bank in Brazil and I used to go to karaoke bars, but I never had the courage to go on stage, until the day I decided to go up, because they were having a contest and I didn’t want to miss out! Forty-eight people had signed up and I got third place! Then I thought: “well, I guess I am not a bad singer after all!” I became famous in my banking community, fell in love with singing and bought a karaoke machine to play with at home.

How did you come to Canada?
Iglesias – I have four cousins who live here, and at the time, I had just separated from my son’s father. I was working at the bank, I didn’t have a university degree and thought: “what am I doing here?” My mom suggested that I spend some time in Canada, to make some money then return home. I applied for a visa and arrived here on April 5th, 2002. When I left Brazil the temperature was 35ºC, when I arrived here it was 5ºC! At that moment I thought to myself: “It’s so cold I want to go back!”

How did you continue with your singing here in Canada?
Iglesias – When I arrived in Canada, I looked for places that had karaoke. There was a new bar on Dundas St, the Brazilian street, that had karaoke in Portuguese and, right from the start, I would go there and sing three or four songs and would leave. After some time, as soon as I walked in the bar, people would come up to me and compliment me on my voice and ask me to sing certain songs!

From the karaoke stage to larger stages, how did that happen?
Iglesias – At the same time that I was singing at the karaoke bar, I used to go to a Brazilian bar, also on Dundas, called Barril Bar. There they had a band that played on Fridays and Saturdays, with Alexandre Silva, Edimilson Nogueira and Caco Batera. In short, one night they asked me to sing with them and I sang “Não deixe o samba morrer” by Alcione and from there I was invited to sing at the Nossa Senhora Aparecida party, held by the Santo Antônio church, and now I participate in it every year.

Was it at this party that your career took off 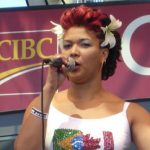 ?
Iglesias – At the church party I met Consola, Alan Hetherington’s wife. He was in the band Sambacana. Alan was a very important person for me here in Canada, because through him, I substituted for the singer that they had, and stayed with the band for almost five years.

As well as being a singer you are also a composer, where does your inspiration come from? Has Canada influenced your music?
Iglesias – Normally, my inspiration comes from the moment that I am living, but I began composing because I like to write poetry. I recently began to compose when we decided to make a CD. For the song “Multidão”, for example, I was driving and there was a lot of traffic, I wasn’t feeling very well, my spirits were down, so I called Wagner to say something about the band, and he was in a really good mood and when I hung up the phone, I began to hear a murmur, a melody in my head and then I started to think of some lyrics and that’s how the song “Multidão” came to be. So Canada has influenced me because I live here.

What was the greatest challenge in your career?
Iglesias – The greatest challenge for me in Canada was the language. Now with this singing career that I never had, it’s funny, but music always came naturally, I never thought of making a CD, participating in shows, singing or putting myself out there. It all began very naturally. Even today it is like that; natural! There are many people who have a hobby, who spend money, but I am very fulfilled because I do what I like and I make money from it!

Here in Canada there are a reasonable number of Brazilian artists, what do you feel the market is like for Brazilian music here?
Iglesias – It has been growing and I hope that it grows even more! Many people think that we get jealous when someone new shows up, but I am not and I think that it is great when there is a new artist. I am a singer, but I am also an audience. I have performed many shows for Canadians. They love Brazilian culture and it is successful. But to get on the radio is very hard. I think it is because there are many people in the market, and there are many Canadian artists. The Sambacana CD, however, is selling on iTunes and CBC Radio also plays our songs. As a matter of fact, they chose “Multidão”, as a work song from our CD.

What was the greatest emotion you ever had?
Iglesias – It was at a small jazz festival, in a small city called Loren, in Ontario. There were 600 people more or less and some Brazilians too. I was singing the song “Malandro”, when I asked the audience to sing with me, the band turned the sound down and everyone started to sing with me. My eyes filled with tears. I proved that music is universal. I thanked them, because it was through them that I learned to have more respect and love for my culture. I had never seen Carnaval the way that they do here in Canada.

Do you have any plans to record a solo CD? What’s next?
Iglesias – Yes but, it all depends on the finances. Unfortunately there is no set date. But if I were to do ten songs, at least two would be MPB. To make a CD you need to focus on a Portuguese market and audience that like more energetic songs!