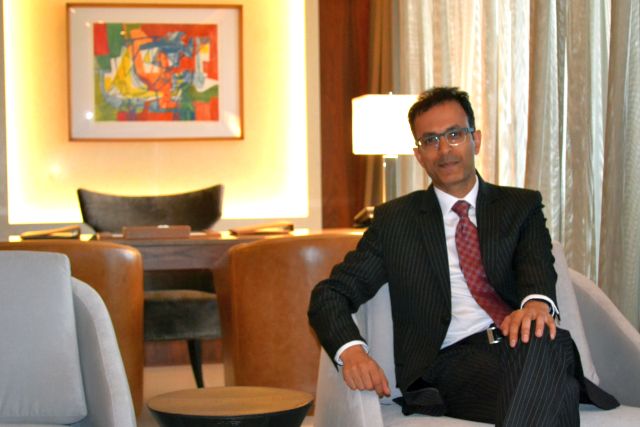 He has twice been considered one of the “10 most interesting foreigners in Rio de Janeiro”; when (for the first time in 83 years) Christ the Redeemer was illuminated with red and white in honour of Canada Day, and when he received from the City Council the title of “Honorary Citizen of Rio de Janeiro.” Definitely the Canadian Consul-General Sanjeev Chowdhury is a Canadian with carioca soul. Designated by Prime Minister Stephen Harper to the role in 2011, Sanjeev Chowdhury stood out in the strengthening of relations between Canada and the Wonderful City and won in 2014, two more years at the consulate, where he will stay until the end of the Olympics.

Wave:  What is your expectation as Canada’s official representative to the first Olympics in South America?
Chowdhury: I consider it an honour to be able to serve as Canada’s Consul-General in Rio de Janeiro during the Rio Olympic and Paralympic Games.  This will certainly be a career and personal highlight for me, although I was also here for World Youth Day with Pope Francis in 2013 and the World Cup in 2014.  Both of these international events saw a large influx of Canadians into the city, and everyone who came had a great time and enjoyed the outgoing and welcoming nature of the residents of Rio.  I know that this will repeat itself during the Games and that Canada will do very well in the competition and that our Canadian visitors will fall in love with this city and country, as I have.

Wave:  How will the consulate in Rio de Janeiro support the Canadian delegation during the Olympics?
Chowdhury: The Canadian Consulate General has actually been supporting the Canadian delegation for the last five years, a journey that has been fantastic to experience.  We expect around 600 delegates (athletes and staff) for the Olympics and 300 delegates for the Paralympics.  We will also have, of course, friends and family and other Canadian dignitaries and tourists coming to town.  We work with the Canadian Olympic and Paralympic Committees regularly, helping them by providing advice, meeting space, local contacts, and more.  During the Games, we will remain open for extended hours to ensure that we can serve the delegations and Canadian visitors, should they require assistance.

Wave:  Do you believe that Rio de Janeiro is prepared for this event?
Chowdhury: I believe very strongly that the city is prepared to host the Games, and will in fact surprise everyone, as Rio always does, by producing the best Games ever.

Wave: There is much fear for example regarding the violence. Any special recommendation to Canadians who go to Rio de Janeiro for the Olympics?
Chowdhury: Rio is a large city and faces challenges that many large cities face when it comes to crime.  To assist travelers to the city, the Government of Canada has prepared a special webpage of travel tips, and I would encourage all visitors to this great city to read it carefully to help ensure a safe and productive stay in Rio:

Wave: What about Zika? Is the risk as great as is reported?
Chowdhury: Zika is a serious illness that people should read about and discuss with their medical professional prior to travelling to Rio.  Also, one of the greatest sources of information on the disease is through the Public Health Agency of Canada website, and I encourage all Canadians travelling to Rio to familiarize themselves with this information in the website.

Wave: Do you believe that the current turbulent time in Brazilian politics will somehow affect the Olympics?
Chowdhury: The Olympics is an entity unto itself, and, as a result, the current political situation in Brazil has not really had a great effect on the planning for the Games.

Wave: How do you evaluate the Canadian delegation going to Rio de Janeiro for the Olympics? Does Canada have a good chance to improve their performance in the number of medals?
Chowdhury: I have had the honour to meet a number of Canadian Olympians and Paralympians over the past few years, many of whom have qualified for the Rio 2016 Games.  I am so impressed with the character of these people, my fellow citizens, and I have no doubt that Canada will do very well.  I look forward to attending many medal ceremonies.  Go Canada Go!

Wave:  Do you think that an event like this can bring any opportunity to strengthen relations between Brazil and Canada?
Chowdhury: Any time you have people to people exchanges, be they through education, sport, culture or tourism, you cannot help but create stronger links.  This will certainly be the case for Canada and Brazil, as Canada is already a very popular country in Brazil and people here are quite fascinated with our new government and Prime Minister, Justin Trudeau.  So, I expect a lot of media interest in the Canadian delegations.

Wave: By the way, how are the efforts to strengthen the ties between Canada and Brazil in various areas such as trade, culture, sports and education?
Chowdhury: Canada and Brazil have strong ties in all of these areas, and more.  The details are too large to describe in this particular interview, so I would recommend that people read about our bilateral relations in detail on our Government of Canada website and contact us if they have any questions or require further information: www.brazil.gc.ca

Wave: We heard that you will leave Rio de Janeiro after the Olympics. How do you evaluate period spent in Brazil and what will be the next professional challenges?
Chowdhury: I was very pleased to receive a two year extension to my original three year posting to be able to oversee Canada’s participation in the Games.  While I will be sad to leave Brazil, I am on to new challenges.  I will be on a six month sabbatical studying in France in early 2017 and will then return to Canada for a yet unknown assignment.  Regardless, I will leave this city and country knowing that we have developed relations to a newer, higher level over the past few years.  Our trade numbers are strong, our people to people ties are even stronger, and the new flight on Air Canada between Rio and Toronto has really taken off (pardon the pun) and I was so pleased to be able to inaugurate that flight in December, 2014.  Personally and professionally, these past five years have been the best of my life.  I was recognized for my work in Brazil and Rio on many occasions, and on May 27, the city named me, along with 14 other local personalities, an “Honorary Ambassador” for the City of Rio in recognition of my work here.  It’s a great honour.

Wave:  Finally what is your message to the Canadian delegation that goes to Rio de Janeiro for the Olympics and also for the Brazilians who will be hosts in this which is the main sporting event in the world?
Chowdhury: My message is simple:  have a great time, use common sense, and enjoy yourselves.  Experiences like these are once in a lifetime events, and savour every moment, meet new people, and share the best of both worlds with each other.