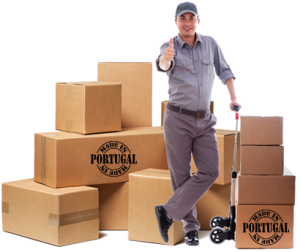 The MELLOHAWK Logistics story began in 2002 in Downtown Toronto, concentrating on forwarding cargo mainly to the US, China and South America, particularly Brazil. Today, as an international freight forwarder, MELLOHAWK transports cargo (project cargo, dangerous goods, personal effects) to any destination around the world. The company has built a global network of over 150 international freight forwarder agents. To provide personalized customer service, MELLOHAWK management created close personal relationships with these international partners. The company continues to grow at and has received several awards for community involvement and promotion of Canadian diversity. MELLOHAWK Logistics prides itself by delivering logistics services with high emphasis on client satisfaction and problem resolution.

Continuous change is a MELLOHAWK hallmark; so the company renews and expands its marketplace coverage by signing up new partnerships and joining new international networks.

Portugal is its new challenge. According to EDC (Export Development Canada), Canada and Portugal have an established and growing trade and investment relationship despite the continued challenges of Europe’s sovereign debt crisis and the associated weak economic conditions. Portugal’s economy continues to progress well in its transition from traditional, resource-based industries to knowledge-intensive, high value-added industries. As with most modern economies, trade is of high importance to Portugal’s market and the potential for Canadian companies is strong.

Thousands of shipments to Europe every year make MELLOHAWK Logistics an expert on European freight. Our expansion to the Portuguese community will emphasize our reputation in Europe. Portuguese customers can expect not only a company who speaks their language, but also a real partner, who will pick their side on finding the best solution for their shipments, saving time and money. Once they agree to ship with us, their cargo will be our cargo. We will do everything in our hands to offer the best cost-effective service they ever had. (Arnon Melo, MELLOHAWK Logistics Managing Director).

Interview with Ronnie Von and his son Leo Von